The Soldier and the Terrorist 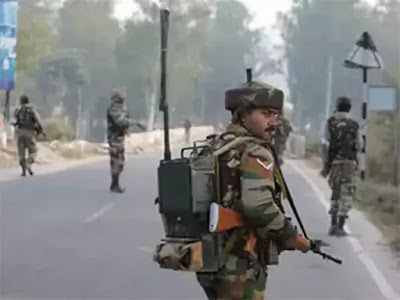 The Soldier and the Terrorist met just beyond death.

There were no boundaries here, in this realm that was neither dark nor light, neither now nor then, where the past was inconsequential and the future non-existent. It was easy to talk here and so they did, if you can call it talking. But then, it did not feel any different from talking as they had known it.

I’m dead, then. The Soldier remarked. Matter-of-factly. As if it were an absolutely normal thing, as if he had known that it would happen someday.
The Terrorist looked around himself. And then nodded. Yes, this is death. Un-surprised. He had no doubts.

They now looked at one another: the Soldier and the Terrorist. And found that they were both young men.

The Soldier was curious: You drove that car-bomb into our bus?

The next question came automatically: Why?

The Terrorist answered: We seek revenge. Mechanically, as if it was a reply he had rehearsed often.

Revenge. The Soldier muttered the word to himself, under his breath, weighing the syllables. Revenge. But I don’t know you. Never met you before.

The Terrorist paused and then checked the Soldier’s face. No, he agreed. We’ve never met.

…And yet, now we are both here. The Soldier breathed deeply and smiled. Waving to the nothingness around, he said: There doesn’t seem to be much to do here.
Come, let’s sit.

The Terrorist hesitated, a split moment in that timelessness and then sat down. Cross legged. Beside the Soldier.

That was one hell of a bomb. Ekdum Atom Bomb. The Soldier laughed.

Yes it was, wasn’t it? The Terrorist asked. Without much enthusiasm.

Everything just evaporated, bus, bodies, everything. And you too.

Yes, and me too. The Terrorist was musing. I became air. Along with you. And everything else.

Not everything though. The Soldier corrected him. Few things remained. Mangled steel, a leg here, a finger there, a tatter of skin, a sliver of bone, a shard of bullet-proof vest……

Right. Did you see how deeply red my blood is?

Mine too. Such dark red.

The Terrorist’s brows scrunched together. Disapproving. You have a girl friend?

The Soldier laughed shyly. No no, I’m married. She sent me red roses. Photos. On Whatsapp. And a poem. A pensive shadow passed across his eyes.
You didn’t get any roses? He asked, brushing the shadow away.

The Terrorist did not like his question. Love is frivolous. He was full of scorn. Wasteful. He said, in deprecation.

The Soldier however, smiled softly. She had packed boondi ke laddoos for me. And my mother had made namakpadas. Two whole dabbas. Love is not such a bad thing, you know.

The Terrorist did not reply.

They let the emptiness flow between them for some time. There was no hurry.

Then the Terrorist spoke once again. My mother had shoved four five hundred rupee notes into my ferhan pocket. The day I left for my examination. “Buy a pair of good quality sneakers," she had told me. "These ones have their soles all worn out.”

What did you buy? Reebok?

The Soldier looked into the Terrorist's eyes. You didn’t take the examination.

No. I went away for training.

What kind of training?

They said that training was needed to defeat the Enemy. To take revenge. For the Cause. For the Gods. For the Land.

So, I’m this Enemy? The Soldier was smiling. Tell me, who are these ‘They’?

Great leaders. The Terrorist had awe in his voice. They bring to us the Word of God and Righteousness.

The Soldier smiled, amusement glinting at the edge of his eyes. Ah ha. And see, now we both are here. And none of Them are.

The smile remained for a moment on the Soldier’s face. Gods talk in such hard-to-understand languages. And, frankly, I’ve never quite understood why they are so possessive of us, these Gods.

The Terrorist shifted focus and challenged. You tell me why you became a Soldier? If not God nor Land, then what?

How would I eat otherwise? So many mouths to feed and food so expensive.

The silence woke up once more between them.

Why do you beat us up, drag us out of our houses, maim us? The Terrorist’s voice was almost peevish.

Why do you pelt us with stones, ram us with bombs, snipe at us behind our backs? The Soldier countered, equally petulant.

The Terrorist had no answer. Neither had the Soldier.

Now they want to avenge our deaths. The Soldier suddenly remarked.

Good. We’ll see more of your clan joining us here then. The Terrorist guffawed.

And your tribe too. The Soldier retorted.

Suddenly silence descended, like the abrupt curtains at the end of a stage play.
A realisation surged in the ether between them.

Whose war is it that we fight? The Soldier asked.
Is it Our war or is it Theirs? The Terrorist echoed.

No one was there.

Only Death, the great Leveller, who watched over them in implacable silence.

And far far away, beyond reach, throbbed the endless sounds of sorrow: weeping mothers, grieving wives and the lament of lovers………….....

Hi! Thanks for stopping by!