The stone-walled structure stands at a prominent street corner. At dusk, it is lit from its two opposite edges by yellow neon lights that turn the pale peachy hue of the stones to a friendly orange. It's a memorial to a fallen soldier, a very simple structure really, unassuming and without ostentation. There is no bust, no Eternal Flame, no Weapon and Helmet, just two marble plaques, one inscribed in English, the other in Hindi. It is very old, almost as old as I am and the story it tells is even older, from a time during the birth of this country. Those times had been bloody I know, neighbour pitched against neighbour, brother hurled against brother. The birth pangs of our country had been excruciating, something we all know very well. Much has been written and spoken about those terrible times, a shameful, horrifying blight on the pages of our history. Around nearly that same time, another drama had played itself out in the northern most part of our country, in that paradise on earth called Kashmir. Its a story few are aware of for it finds no place in school textbooks, in films, in soaps on TV or in its daily raucous debates. This is a story of the heroic exploits of a handful of Indian Army soldiers and in the annals of Indian military history it occupies a proud and important place. This orange tone stone wall memorial celebrates a soldier hero from this very battle, a soldier who was martyred therein. 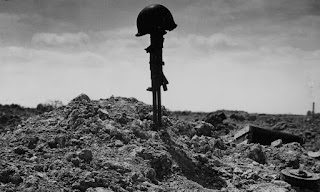 I stop and read the plaque. He must have been young, the Hero for it is always the young who die in battle. The piece describing his exploit is brief and it takes me hardly a minute to complete reading. My remaining evening walk beckons but I stand for a few moments before the memorial. No, it isn't that I am paying any ritualistic respect, it's simply that I find myself thinking: thinking how lonely this little stone memorial seems to be. No one stops here, though it sits on a busy and prominent thoroughfare: neither the children laughing and skipping down to their badminton and squash games, nor the  women rushing through their evening walks, not the men cycling along or whizzing past in their fast cars to wherever it is that they have to reach. I have stopped, true, but that doesn't count for I am just an Alice and I have nothing better to do.

I return to my walk and as I trudge up the hill road, my breath coming in laboured gasps, I think of how when things do not affect us directly, forgetting comes very easy and when things do not concern us, not knowing comes easier. And then there is the harsh reality of our violent times where every day brings new martyrs and new heroes and then, old heroes such as this Soldier of the Orange Memorial fade into Time's dusty archives, memories of his valour blunted, his glory dulled. I feel a little sad but then how does my feeling matter in the greater scheme of things, I ask myself pessimistically, clambering up the hill.

At another time, I find myself walking down that same road but instead of dusk, it's near dawn now. I pass by the memorial. In the morning it's a different sight: a stray dog snoozes on the little parapet by its side. On seeing me stop, for some unknown reason, it gives me a doggy salute, fore legs bowed, tail curved in an elegant concave. A few mynahs flutter around busily as an entire flock of bright green parrots with long graceful tails sweep down and sit on the stone wall, chattering importantly in their parrot tongue. The rays of the dawn sun fall on the peach stones, turning them now a fiery orange. A squirrel scampers down the tree trunk behind and rushes up the stone wall, it's tail flicking up and down. The snow on the mountains high above catches the sun's rays and shines a bright pinkish orange, making me wish that I had brought my camera along to capture it. My friend the brown dog steps off its perch and stands next to me, tail wagging. In that pink gold light of dawn, we stand together before the memorial, ragged dog and lost woman, watching the squirrel, the parrots, the mynahs and the sun play happy games over its orange stones.

A car suddenly passes by us in a rushed whoosh and my reverie is broken. I take leave of the dog and return to my walking, huffing and puffing once again up that steep slope. But this time I feel happier for it seems to me in my Alice brain, that as long as the birds and the dogs and the squirrels and the sun gather around the martyr's place each dawn and dusk and in between, he would be at peace..............!
- February 07, 2017 No comments: 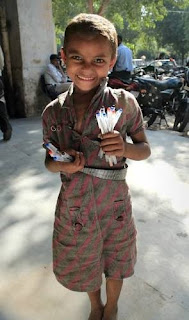 The Union Budget is raging.....on television, on the internet, on WhatsApp, on Twitter, at neighbourhood nukkads and it seems today, almost at every place. Now, having never passed a single of my martinet of a mathematics teacher Mrs Santra's dreaded monthly maths tests, I have this pathological loathing of numbers, of all shapes and denominations. And therefore, I have no interest either in the Budget or in the crunching of numbers that it brings up. But the denizens of social media, totally insensitive to my dislike for numbers are sending me innumerable feeds on the Budget that run like this: 'Fiscal Deficit at 3.2%; FDI Investments 1.45 Lakh Crores, Income upto 2.5 Lakhs - Nil Tax Income above 2.51 Lakhs to 5 Lakhs- tax reduces to 5% Tax from 10%, Agriculture 10 Lac Crores credit, MNREGA 48,000 Crores, Rail Budget 1.31 Lakh Crores, 67,000 Crores for National Highways, Disinvestment Target 72500 Crores, 10,000 Crores to PSU banks for Recapitalisation, 2.44 Lakh Crores under Mudra scheme, Defence Expenditure 2.74 Lakh Crores, Long Term Capital Gain 50 Crores...........................................!

My head reeling with all these numbers, I run away to the local bazaar. It's a typical bustling, busy middle class Indian market, the only one of this locality of our little mountain town. But here too, the Budget reigns with shopkeepers, grocers, customers and even the odd window shopper glued to every available TV set.

I walk, like a fish out of water when a street urchin crosses my path. He is tiny, all of three feet and naught and in this terrible Himalayan cold, wears just a thin torn cotton shirt and a thinner cotton pants, held together by a lone safety pin and lots of luck. As he passes me by, I smell unbathed days and see thin ribs sticking out from under his frayed shirt.

Nothing useful to do, I follow him, my ruthless blogger brain composing his already composing his description. He enters a grocery store. I follow physically and peep in. He's looking up at the wall somewhere beyond my gaze. I crane my neck a little further to see what he is seeing. It's a TV, mounted on the wall of the shop. And here too it's the Union Budget.
Such huge numbers, I think and though I marvel at their humongous scales, I am unable to figure out how all these schemes and sops and five year plans would solve this little ragamuffin's current and immediate requirements : some hot food, a warm sweater, perhaps a hot bath and a shelter for this night.
I glance back at the child sadly, the irony wringing my insides. But in the kid's face, there's neither sorrow nor self pity as he watches the television quite unconcerned of his present penury, enthralled by the colourful dancing images....and I realise, my elitist, feel-good pity has no place here.

I retreat, leaving them be: a tv screen playing out numbers in droves, of money in lakhs and crores and arabs...and a little boy shivering in his tattered clothes but watching entranced, dreams as big as those numbers dancing unfettered in his eyes.....................! 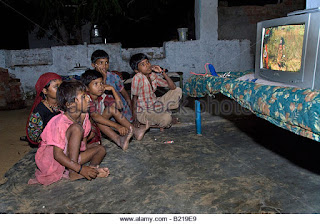