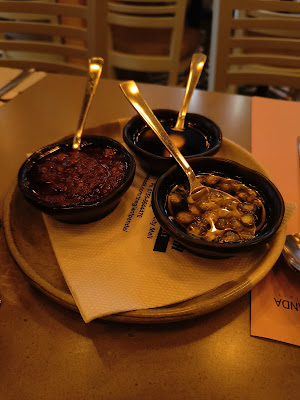 I Asked Sorrow to Tea

I asked Sorrow to tea yesterday. Nothing too ostentatious, just some Darjeeling steeping in my China teapot; and crackly toast with butter, sugar and a sprinkling of pepper. Old familiar comfort food. Sorrow was wary. And bloated with sting. Not unexpected. I let the tea warm my palms. And the sweet buttery salty peppery toast soothe my heart. Then I put out my now warmed hand to her. And offered her a toast. We crunched in silence, washing down toast crumbs with the warm tea. I mustered a smile. You have to stay for long here..... I said to her. Very very long. Let's be friends. Startlingly, Sorrow smiled from behind the teacup, showing toast crumbs on her teeth. And then she let go of her sting.
- August 23, 2022 No comments:

today under the mountains,

my world is rain and sleet.

hands that touch me in promise

promise only breaking away....

songs find hard to take root in this winter-world

i was used to being a lonely planet

Those few days had been bad, real bad. Other Half lay in hospital, a sprained back rendering him unable to walk. The experts had advised spinal surgery but even the very thought of it chilled me to the core. Old friends who were doctors would call up and each time I told one of them that a spinal surgery was needed, I could feel how they would go suddenly very quiet. Then, carefully,  tentatively they would ask me, " AiBee, is the surgery really necessary? Wasn't there some other way out? Have you considered taking a second opinion?"

Even in this day and age, surgery of the spine is something that we doctors too are very wary of. But there was no way out and that was how Other Half now lay nearly immobile on the stark white hospital bed in that huge hospital in Delhi, waiting to go under the surgeon's knife.

Delhi was foggy and dismal; the strange unhealthy cold burning through my skin and imprinting itself in my very cells. The hospital was state-of-the-art, but lacked warmth, it's long gray corridors paved with slippery, white tiles and sickly green marbled staircases doing nothing to dispel the gloom. Daily as I walked down those endless corridors, I could see the fog weaving into the precincts in eerie swathes and occasionally, I could hear women wailing from the depths of its numerous wards, mourning a patient's death and my heart would thud in anxiety and empathy for that hapless sorrowing soul. The ward where Other Half was admitted was no better, a grim, shabby place full of souls who stared at me with empty eyes, as I walked in each day to begin my twelve hourly vigil by Other Half's bed. I remember the fifty something man so aged by Non Hodgkin Lymphoma a blood cancer, that I had thought he was in his late seventies. Then there was the man with a Harry Potter scar on his forehead from an old brain surgery who kept wandering away and getting lost due to amnesia from the surgery. And of course there was that bad tempered very old man right on the opposite bed who kept coughing and coughing and coughing.......and driving the rest of the patients completely mad.

I was functioning on an auto mode as  there were too many things that were troubling me all at once: would Other Half be able to walk again? What if the surgery left neurological complications like paralysis or loss of bladder/ bowel control? Would he be able to successfully come out of the anaesthesia? Silly illogical doubts that assumed gargantuan proportions because being a doctor, I knew that they were not silly at all, that the possibility of their occuring was very chillingly real. Then post the surgery, the fellow began to have fever, great shaking chills which subsided with profuse sweating that wet the bed clothes and left the poor man completely drained. The doctors spoke in hushed tones of  "septicaemia", any physician or surgeon's nightmare, filling me with dread.

It was in these terribly trying times that Nidhi and her little family opened their home to me. I stayed with them for about four days as they lived right next to the hospital and it was very convenient for me to nip in and out of the hospital from their place.

Mentally, as you can guess, I was in a very bad place at that moment and the best thing that happened to me right at that point was the opportunity to stay at Nidhi's.

I didn't know her too well till then for I was a friend of her husband's, a polite helpful young man. But we did have a passing acquaintance and I had always found her to be a pleasant young woman. Here at her home, I came to know her better. Slim, with a quiet face framed by silky straight hair, Nidhi exuded an air of repose. Her quietness was very comforting to me, for she never prodded and was  never unnecessarily curious. Sitting with her sipping tea or watching television or chatting as she worked in the kitchen, I felt my anxieties quieting, ebbing..... But it was her breakfasts that turned me to mush.

In that cold, foggy Delhi winter, that too during Corona times when most people were working from home and all schools were shut, most households did not stir before nine thirty- ten o'clock. But I had to rush to OH's bedside at eight and hence on my first night there, I woke up at around seven. It was cold and dark outside; and as I got dressed, the clinks and tinkles from the kitchen told me that Nidhi too was awake. Clutching my handbag, phone and mask, I hurried out to the little dining hall, wanting to put on my shoes and get going: only to be stilled with surprise at finding breakfast laid on the tiny table: a perfectly made alu ka paratha, smelling as motherly as parathas have smelt for centuries resting on a spotless china plate with a blob of Amul butter melting in its bosom and a huge cup of steaming tea standing to attention beside it. The curtains were still drawn to keep the ghoulish morning at bay and on the shelf above the dishwasher, SaReGaMa's Carvaan softly played old bhajans....I stood for a moment overwhelmed before Nidhi's breakfast; then quietly retreated back to my room embarrassed by the sudden spurt of tears clouding my eyes...Bruno, Nidhi's German Shepherd who was at this juncture, still not quite decided upon as to whether he could be my friend, came and sniffed at my feet in a companionable gesture and went way. I composed myself and went back to Nidhi's breakfast.

And so it was the same for the next three days that I stayed with them: every morning, sharp at quarter to eight the table would be laid with Nidhi's breakfasts: nothing very sumptuous or complicated, bread and omelette or maybe upma; all very simple and homely and made with care.

When one is going through a rough patch in life, I've personally found that it's not the reassurances and platitudes that friends and well wishers offer you, the "don't worry, sab kucch theek ho jayega" kinds or the wise advice/gyaan that many offer like "be strong" that are of any benefit. What works are small, very small, seemingly very inconsequential gestures like the offer of a hot homely breakfast or a tall cup of steaming milky tea or maybe idlis and sambhar packed in a hotcase....

They give you a space, a space full of warmth and comfort, a space where you can retreat for a tiny while, away from the cloud of fear, anxiety and sadness enveloping you to rest and to recoup.

This last one month had been a tough experience for me but the burden was made lighter by innumerable  kindnesses of innumerable friends acquaintances and even strangers.

Amongst all the memories that I  cherish, there is one that will always hold a special place in my heart: of eating hot, straight-off-the-tawa parathas topped with molten butter and washing it down with great warming sips of milky tea as Saregama Carvaan fills my ears with fondly remembered bhajans on a cold foggy January morning.......

And I'll always, always be indebted for my Breakfasts at Nidhi's..

People give me the tinkle when they’re short of lent ears. Or have run out of them.

No prior appointment, no booking; no advance payment:I’m all ears, notwithstanding.

There is never need to hesitate: I’m respectfully, empathically attentive, by default.

I listen without interruption, interject with compassion, intersperse with soothing benediction.

An anguish bothering you?

A sadness cloying you?

A doubt clouding your mind?

No fret: send word for the Listener.

I will give you top class listening: silent, soothing, uplifting; I will empty the air around so that you can vent to your angst’s content; I will arrange my countenance to suit your want: pity, reassurance, support, disbelief, shock…whatever……

At night, the Moon climbs down the late night sky and dangles her beams from atop the bottle brush tree.

I sit on the rusted swing and talk to my heart’s content.

To the Moon who is my Listener.

The masked waitress had placed a wooden tray with three little black porcelain bowls: one, the staple green chillies in vin...