I was reading a book of translations of Rumi's short poems last night and currently am very taken in by his form of poetry.

So here's another one, couplet style.
A little morbid but never mind; do bear with me for I love the form.


You judge my sorrow
And remind me of that man:
The one who had no feet for shoes.

But my sorrow is mine : unique, off-beat.
A mine.
Who know what may birth from it
What poem
And what song...


So don't teach. Don't preach.
My sorrow is mine
Unique and offbeat. 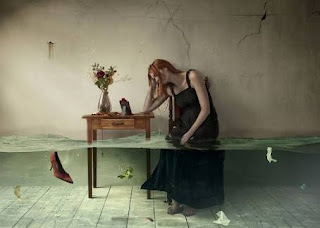 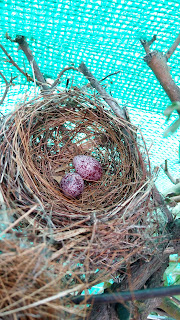 All night long
I rant at Life
For these trials and tears
It throws at me;
And then next morn
That shameless Thing,
Sends the bulbuls to placate me! 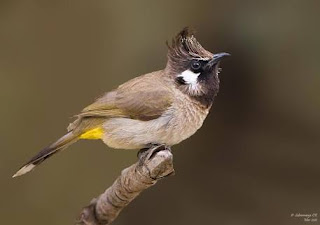 I haven't written a blogpost for a while now and that's not because of any lack of inspiration, but only because I've been much too enamoured by watercolours lately.  But then sometimes certain experiences are so, if I may be permitted to use a bland word, "nice", that you feel a compelling need from within to share it with others.

This one is of limited appeal for its implications are something that only an Indian Army officer would understand. So here goes:-

It was a Dining Out dinner with a long guest list of officers. An officer, let's call him Col Kay, was delivering the farewell speech for his subordinate, someone I will call Lt Col Gee.
Now, as a rule these speeches are gut wrenchingly boring, filled with those standard hackneyed phrases which  are  mere  lipservice and singularly lack what I call "heart".
I, therefore tend to  either sleep with my eyes wide open during these speeches or let my mind wander, all the while shifting from one aching foot to the other.... This time too, I was dozing peacefully, oblivious to the monotonous monologue from the lectern when my sleepy ears caught someone's remark- Hey, they are coursemates!
My eyes flew wide open and interest awakened, I now began paying attention to Colonel Kay speaking at the podium.
Ah, so they are course mates, commissioned together.....And now one of them was "junior" to the other and
working "under" him. Okkkk!

Colonel Kay was saying: He (Gee) is one of the finest officers of the Indian Army that I have come across and not only is he a wonderful person, he is also professionally excellent, one of the best in his field...' Finest officer' is a term that is very special to the vocabulary of the Indian Army and one that none use loosely. I watched Kay as he continued to laud his coursemate with a profusion of praise. Kay's speech was not a prepared one and each sentence that he spoke was a deliberate, one that came straight from his heart. Other people around, just like me, were now actually listening. I watched the man as he eulogised Gee, his voice and his expressions completely genuine and all the respect and affection that he felt for his superceded coursemate shone brightly through. The formal smattering of forced claps that normally follow these  speeches was, in his case, loud and effusive. He had finished and now it was time for Gee to speak. As Gee walked up to the lectern, a  colleague remarked, "Garry Sir looks so serious!"

Truly, the normally ever jovial Gee looked deathly serious as he paused at the lectern, his hands grasping the wooden sides for stability. He said very little in his thank you speech, very very little : the usual do-come-over-to-my-new-station-and-I-will-be-honoured-to-host-you and other just niceties but I easily caught the storm of feelings that were churning inside him. Kay's speech of straight-from-the-heart praise had left Gee overwhelmed, completely overwhelmed Overwhelmed, I think is an understatement. That six foot muscular frame was now an emotional mush but since the soldier can never cry, he stood grappling the lectern sides with knuckles that had turned white and spoke inanities that were so inane that no one heard them. I could understand very well his frame of mind and empathized completely with him. Here was a bright officer, professionally one of the very best in his sphere but for some reason he had been left behind in the career rat race. He must be feeling as if his institution had let him down, as if they had failed to acknowledge his acuity, his contribution, negated his dedication... This being left-behind perhaps had done sad things to his self confidence too, to his belief in himself, to his sense of usefulness to his institution. And now, the pure, unadulterated acknowledgment of his worth by a peer before a whole gathering of his seniors, peers and juniors had unleashed the floodgates of emotion within him. Though he had said very little, the claps that followed him as he left the stage were again effusive, heartfelt. And as he passed by me to mingle in the crowd behind, I caught murmurs of acknowledgment from the crowd- Hey Garry, Ye Ye Garry....I turned to catch the waiting Kay receive Gee with a large man-hug and then arms around shoulder, I watched the two, coursemate and friend head to the bar for that much needed drink.

All though that remaining evening, I was left with a sweetness in my mouth and a warm feeling in my heart wafts of which still linger as I type.......
- May 26, 2018 2 comments:

Another watercolour, from a photograph of Bengal in the rains I picked up from Facebook. It's a monsoon scene which I hope will give your some cooling freshness in this sweltering month of May...

And with it, I've added a Tagore verse to enhance the experience...

Leave a note on the painting...whether you think I've evolved ..Or not.. 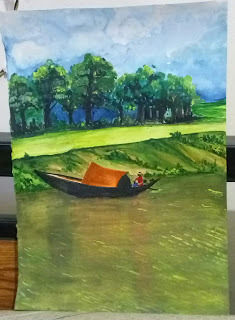 I once had come upon a bedraggled painter who when he was not drunk painted with oil on canvas and sold them for a living. His name was Bhaskar and he was quite good at his art but drink would mostly get the better of him. He charged about six to eight hundred for a canvas of size six by four ( this was 2008). This being very affordable for small time art lovers like us, we gave him pictures to convert to canvas. Mostly, he returned with a painting in about a fortnight or more but sometimes he simply went underground for days, trying our patience to the limits. We managed to get him to do about three or four paintings but in the case of the last one which I had kind of commissioned personally, he simply disappeared into thin air and was never seen again. This picture was one of a pond full of water lilies, the ones we call shaluk in Bengali. I adored that little picture I had picked up from a desk calendar and it cheesed me off no end that Bhaskar never returned this picture back to me.
Later, I heard that he had succumbed to an alcohol induced illness.
I came upon a lovely watercolour of lotuses growing in a shallow pond and have tried to reproduce the same.

Leave me a word of encouragement, your good deed of the day😁😁😁.

I'll upload three pictures today:
No 1:The Pond Lotuses (My work)
No 2: A pix of my worktable ( JLT)
No 3: One of Bhaskar's paintings 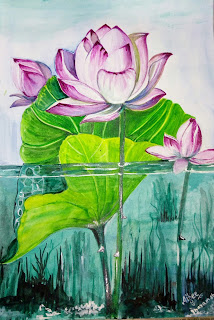 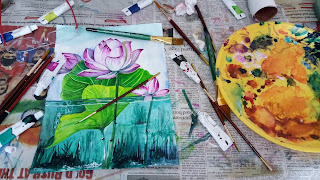 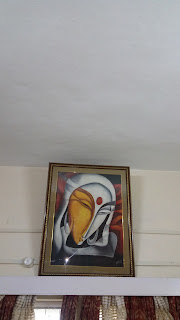 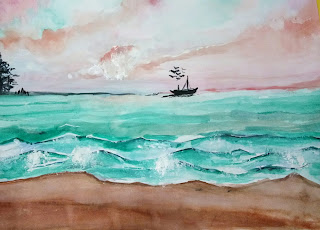 I love the mountains but I love the sea more. The sea is like an old acquaintance, someone you've known long but not met in a while, someone you don't get to meet often; but then when you do, the familiarity comes rushing back.....the warm salt smell, the well remembered voice's inflection, the Viridian hue where the sun rays fall, the turn of the lips in a smile, the white foam's dance on the green wave's edge, the old shared memories, the crunchy sand sinking under your feet.....

This one is a watercolour copied from an original painting by Maria Raczynska.

Your feedback will be appreciated deeply, straight from the 💓

Blossoms of cherry
And painted birds;
Once I had wooed you
Only with words.

Now, let me court you
With colours gay
Stirred, perhaps then
You'd turn my way. 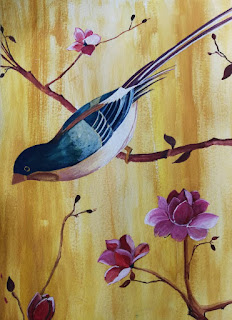 How beautifully the sun sinks to rest
Flooding the heavens scarlet
Here and there smears of blues
The sky looks wondrous in all these hues.

How beautifully the sun sinks to rest
The birds hurry home to their nests
The sun lingers on for some time
To view with pleasure
This pretty earth it  is leaving behind.


Wrote this when I was in class VII, all of twelve years.
Today, at forty six, I've put it in paint. 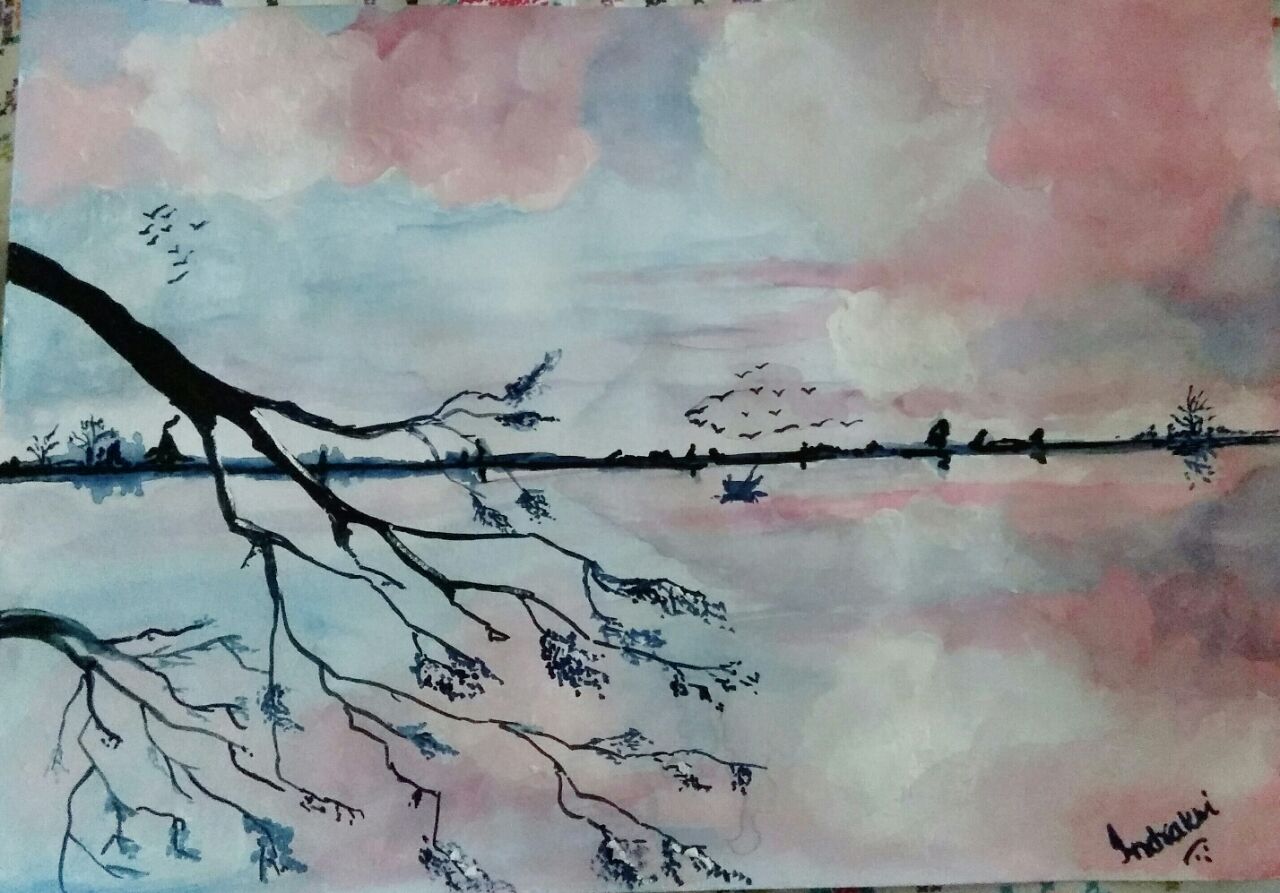 Of You: Yesterday and Today


I had loved the way you were Yesterday:
Spontaneous,
with that little bit
of endearing recklessness;
Heady,
Champagne sparks bursting on my tongue!

I'm wary of this you of Today:
Of this calibrated, standardised you.
Of the way you measure everything
With such excruciating thoroughness:
Thoughts,
Words,
Laughter..........
Then when you throw at me
That carefully mapped and weighted smile
I know for sure:
You are lost to Yesterday
Forevermore. 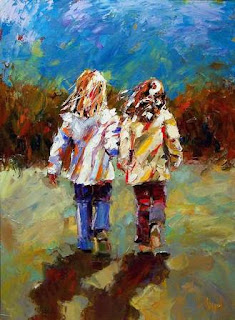 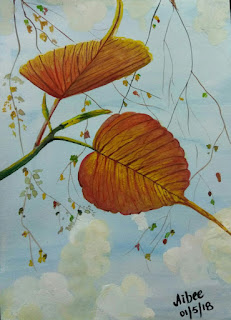 Two leaves
Under a pale blue sky-
You and me
This russet noon
Dreaming, we lie. 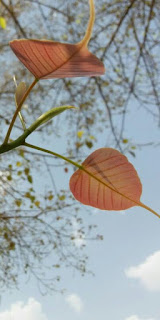